December 2016 – As from January 1st 2017, the well-known automotive parts wholesaler Schwenker located in Minden becomes part of the cologne based Hess Group. In the future the company continuously operates in the market under its own brand name. Through the acquisition of Schwenker, Hess Group expands its business in Germany and Europe. All employees of Schwenker will be taken over.

Within contract signing, the manager Dr. Friederike Schwenker expressed her positive attitude towards the reached succession solution. „As company succession within the family is not possible, we tried to find the most sustainable solution for our employees. We are happy to have found this solution in the Hess Group, a growing, family owned business”. Marcus Scheiber will maintain responsibility for company management.

According to Philipp Hess, managing shareholder of Hans Hess Autoteile GmbH, Hess Group pursues a clear growth strategy and in doing so focusses on its own origins and strengths. „The high quality level of our service portfolio  connects us with Schwenker“.

Besides advantages in purchase it is the main goal of this growth step to bring investments on a broader base, especially with regard to IT and logistics. Dr. Bernd Brockmeier, distribution manager of Hess Autoteile GmbH, mentioned that there will be great potentials by the complementary distribution areas: „Since many years Schwenker is an established wholesaler of spare parts, accessory and workshop equipment in the region between Gütersloh, Hannover, Bremen and Osnabrück“. Besides that Schwenker, as a specialist for German vehicles, serves customers all over Germany and other European countries.

Schwenker manager Marcus Scheiber adds that there will be an expansion of target group. „A main competence of Schwenker is its long-term relationship to independent workshops and traders, which are specialized in specific car brands and to contracted garages - in Germany as well as in other European countries.“ „So far Hess Group had no access to these target groups. Due to the competencies of Schwenker, Hess Group can now reorient their business towards these markets“, adds Philipp Hess.

MARKUS Partners acted as exclusive Financial Advisor to the shareholders of Schwenker.

The family owned company founded in 1952 is a nationally and internationally operating wholesaler for automotive parts. With its more than 300 employees, Schwenker is a supplier for independent and authorized repair shops, carriers, and specialty retailers. Schwenker supplies spare parts, tires, and workshop equipment.

HESS Group employs more than 1,000 employees at 8 different sites in Germany. The company is mainly engaged in automotive parts wholesale. Other business areas are technical trade as well as the manufacturing of hydraulic systems and replacement turbochargers. Since 1929 the group successfully operates in the market and achieved continuous expansion. 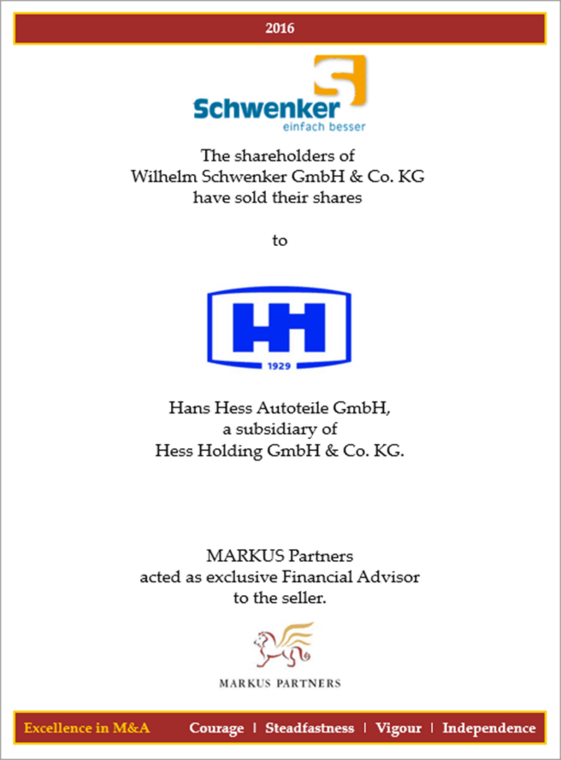